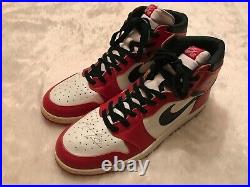 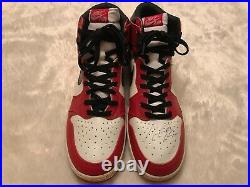 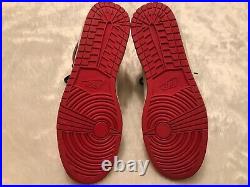 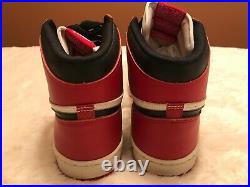 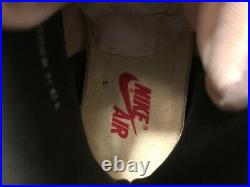 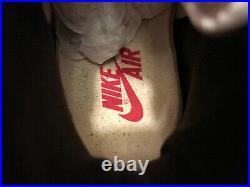 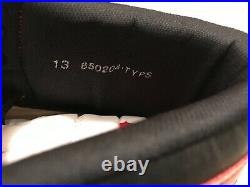 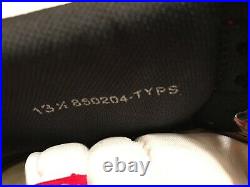 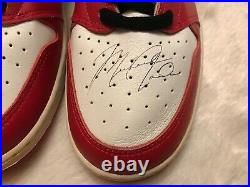 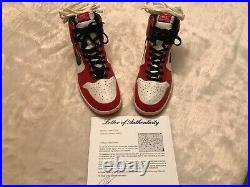 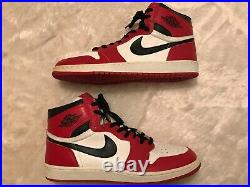 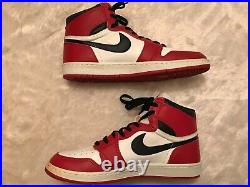 THE HOLY GRAIL OF SNEAKERS. 1984-85 MICHAEL JORDAN’S PLAYER ISSUED. AIR JORDAN 1’S “850204 TYPS”. FOR THE ULTIMATE JORDAN COLLECTOR.. MADE IN 1985 BETWEEN FEBRUARY AND APRIL. THE FINEST PAIR KNOWN!!! The ultimate Michael Jordan autographed display piece. These aren’t just original Nike Air Jordan 1’s from 1985, but a pair actually created expressly for the man himself, as they appear in the mismatched size 13 and size 13.5 combination favored by his Airness and impossible in any other format- there is no such thing as an original Air Jordan size 13.5 for retail sale. Jordan experts will also note the 9/10 ballpoint signature on the left toe box is a period format, probably signed and gifted after the second Air Jordan iteration found their way onto the master’s feet. And certainly any collector who could possibly have interest in this listing will know that this is the definitive colorway of sneakerdom’s most beloved design, the delectable icing on top. Full LOA from PSA/DNA. The red, white, and black Jordan’s carry the code “850204 TYPS” being a reference to the year and month they were made, as well as “PLAYER SAMPLE”, indicating their manufacture for Michael Jordan… As any Jordan sneaker expert will tell you, this is special only to Jordan’s personal models. The Air Jordan 1 TYPS (Tong Yang Player Sample) is a Michael Jordan player exclusive that has been adjusted to his exact. Differing from the retail version of the Air Jordan 1, Jordan’s PE include a lowered and adjusted collar as well as a size 13 left shoe and 13.5 right shoe – Modifications for his comfort. Jordan signed his contract w/Nike on October 24th 1984. Jordan took to the court in the Air Jordan 1’s for the first time on November 17th 1984 against the 76ers. He continued to flip between the Air ships and the Air Jordan 1’s for the remainder of the season. Jordan continued to wear the Air Jordan 1’s into the 85-86 season, but broke his foot 3 games into season and missed 64 games. Jordan only played 18 games that season. Regarded as “GRAILS” in the sneaker community. These sneakers come with the black and white laces as issued to Jordan. PLEASE DO NOT MISS THIS ONCE IN A LIFETIME OPPORTUNITY TO OWN ONE OF THE FINEST PAIRS OF AIR JORDAN PLAYER SAMPLES ON THE PLANET.. SETTING A NEW RECORD FOR ANY PAIR OF ATHLETIC SHOES!! THE CODING’850204 TYPS’ APPEAR IN THOSE SNEAKERS AS WELL… THESE ARE SUPER RARE AND ALMOST NEVER COME TO MARKET.. THESE ARE THE ULTIMATE JORDAN INVESTMENT FOR THE ULTIMATE JORDAN FAN!! The item “MICHAEL JORDAN AUTOGRAPHED GAME-ISSUED PLAYER SAMPLE AIR JORDAN 1 SNEAKERS” is in sale since Sunday, November 8, 2020. This item is in the category “Clothing, Shoes & Accessories\Men\Men’s Shoes\Athletic Shoes”. The seller is “pinstripe_auctions” and is located in Smithtown, New York. This item can be shipped to United States.