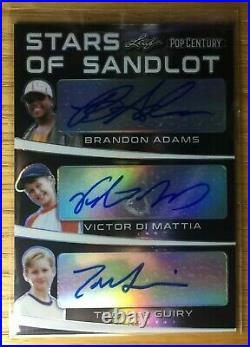 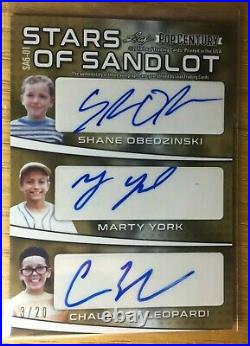 STARS OF SANDLOT BRANDON ADAMS VICTOR DI MATTIA THOMAS GUIRY SHANE OBEDZINSKI MARTY YORK CHAUNCEY LEOPARDI 2019 Leaf Pop Century #SA6-01 BLACK #3/20 Autograph! Add this beauty to your collection. This one is gorgeously and vibrantly signed in blue sharpie by Brandon Adams, Victor Di Mattia, Thomas Guiry, Shane Obedzinski, Marty York, and Chauncey Leopardi, six of the stars of the beloved baseball movie Sandlot. Per Wikipedia, The Sandlot (released in some countries as The Sandlot Kids)[2] is a 1993 American coming-of-age comedy film co-written, directed, and narrated by David Mickey Evanswhich tells the story of a group of young baseball players during the summer of 1962. In the summer of 1962, brainy, reserved fifth grader Scotty Smalls moves with his parents to the San Fernando Valley, where he has difficulty making friends. He tries to join a group of boys who play baseball daily in a local sandlot, but is embarrassed by his inability to catch or throw the ball. An attempt to learn to play catch with his stepfather, Bill, results in a black eye. Nevertheless, he is invited to join the team by their leader and best player, Benny Rodriguez, who mentors him. When catcher Hamilton “Ham” Porter hits a home run into a backyard, Scotty attempts to retrieve the ball but is stopped by the other boys, who tell him of “the Beast”, a junkyard dog supposedly so large and savage that it has become a neighborhood legend. Many baseballs hit into the yard over the years have all been claimed by the Beast, which is kept chained up by its owner, Mr. One particularly hot day, the boys visit the community pool. Michael “Squints” Palledorous has a crush on lifeguard Wendy Peffercorn, and fakes drowning in order to get her to administer mouth-to-mouth resuscitation. The sandlot team is banned from the pool, but Squints’ reputation is boosted. On the Fourth of July the team plays a night game by the light of the fireworks, and Scotty observes that although to the rest of them baseball is just a game, it is Benny’s true passion. Later, they are challenged to play against a rival Little League team whom they handily defeat. To celebrate, they visit a fair where they try chewing tobacco and ride a spinning carnival ride; the combination causes them to vomit all over themselves and others. One day, Benny hits the team’s only baseball so hard that he knocks the cover off. With Bill away on business, Scotty borrows a baseball from his trophy room that is autographed by legendary player Babe Ruth. Being ignorant of baseball history, Scotty does not realize the ball’s value, and hits his first home run, sending it into the Beast’s yard. When the other boys learn of the autograph, they tell Scotty its value and make several attempts to get the ball out of the yard using makeshift retrieval devices, but each is destroyed by the Beast. Benny has a dream in which the spirit of Babe Ruth advises him to retrieve the ball himself, and that this will be the moment that makes him a legend. Benny goes over the fence and “pickles” the Beast to retrieve the ball, but the English Mastiff breaks its chain and leaps over the fence in pursuit. It chases Benny through town, resulting in several comedic situations, and eventually back to the sandlot. Benny jumps back into Mr. Mertle’s yard, but the Beast crashes through the fence, which falls down on top of it. Scotty and Benny lift the fence to free the dog, who shows gratitude by leading them to its stash of baseballs. Mertle, who turns out to be a former baseball player who played with Babe Ruth but went blind after being struck by a baseball. He kindly trades them the chewed-up ball for one autographed by all of the 1927 New York Yankees. Scotty gives this ball to Bill, and their father-and-son relationship improves. The boys continue to play baseball on the sandlot, with the Beastwhose real name is Herculesas their mascot. Over the next few years, the sandlot kids go their separate ways. Benny’s exploit with the Beast earns him the nickname “the Jet”, and he goes on to play for the Los Angeles Dodgers. Scotty becomes a sports commentator, and covers a game against the San Francisco Giants in which Benny successfully steals home. Thanks for looking and have fun collecting! The item “2019 Leaf Pop Century Stars of Sandlot Autograph (auto) Black #3/20 Adams Guiry” is in sale since Sunday, September 22, 2019. This item is in the category “Collectibles\Non-Sport Trading Cards\Trading Card Singles”. The seller is “hg_collectables” and is located in Leming, Texas. This item can be shipped to United States, Canada, United Kingdom, China, Mexico, Germany, Japan, Brazil, France, Australia, Russian federation, Denmark, Romania, Slovakia, Bulgaria, Czech republic, Finland, Hungary, Latvia, Lithuania, Malta, Estonia, Greece, Portugal, Cyprus, Slovenia, Sweden, South Korea, Indonesia, Taiwan, South africa, Thailand, Belgium, Hong Kong, Ireland, Netherlands, Poland, Spain, Italy, Austria, Bahamas, Israel, New Zealand, Philippines, Singapore, Switzerland, Norway, Saudi arabia, United arab emirates, Qatar, Kuwait, Bahrain, Croatia, Malaysia, Chile, Colombia, Costa rica, Dominican republic, Panama, Trinidad and tobago, Guatemala, El salvador, Honduras, Jamaica, Antigua and barbuda, Aruba, Belize, Dominica, Grenada, Saint kitts and nevis, Saint lucia, Montserrat, Turks and caicos islands, Barbados, Bangladesh, Bermuda, Brunei darussalam, Bolivia, Ecuador, Egypt, French guiana, Guernsey, Gibraltar, Guadeloupe, Iceland, Jersey, Jordan, Cambodia, Cayman islands, Liechtenstein, Sri lanka, Luxembourg, Monaco, Macao, Martinique, Maldives, Nicaragua, Oman, Peru, Pakistan, Paraguay, Reunion, Viet nam, Uruguay.